I’ve had three book launches in the past three months.

There are probably some really productive authors out there who could launch three different books in three months, but not me. I launched the same book three times. Is that excessive? In my defence, the launches were in three different places – Castlemaine, Ubud and Melbourne. 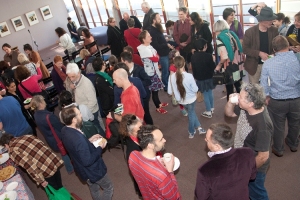 The Castlemaine launch was the original first time new book new author never done this before launch. It was at the Castlemaine library on a chilly Saturday afternoon in August. To make it feel like Indonesia we served dadar unti (pandan pancakes with coconut and palm sugar), lapis legit (spiced layer cake), iced tea and Bali coffee with sweetened condensed milk.

Susan Green gave a lovely speech, which you can read on her blog and the patented Castlemaine library book launcher shot a copy of Tiger Stone into the audience (caught by an 11-year-old who took it to a quiet corner and read for the rest of the afternoon – the ultimate compliment).  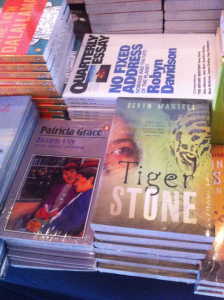 Tiger Stone was in pretty good company at the Ubud Writers and Readers Festival bookshop.

The second launch was the big time international launch at the Ubud Writers and Readers Festival in Bali, Indonesia. It was at Jendela House, an airy, French inspired cafe owned by a lovely Cuban fellow who served a mean margarita (their lemon cordial in hipster preserving jars were pretty good too). Nic Low, who I used to work with at Asialink, was a lovely launcher and the audience was small but encouraging. The rest of the festival was fabulous and I ran a writing workshop the day after the book launch, which I will write about soon.

The third launch was a special event for the Indonesia Forum at the University of Melbourne. It was held in the Melbourne Community Gamelan’s rehearsal room and conveniently coincided with their rehearsal time so they played for us. It felt like Indonesia, even though it was upstairs in a stumpy cream brick building in a Melbourne back street. There is something very special about gamelan music. 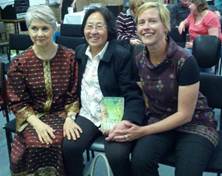 Virginia Hooker, Lien Lee and me after the Indonesian Forum launch

Professor Virginia Hooker from ANU was in town for a conference at the Law School and had agreed to be the launcher this time. Apart from giving a very thoughtful speech and loads of encouragement, Virginia also solved a problem – she found Mrs Lee for me.

I had a phone number and an email address for Mrs Lee, my high school Indonesian teacher, but when I tried to contact her to tell her that I’d dedicated the book to her, I discovered that the details I had for her were out of date. As luck would have it, Virginia Hooker and Lien Lee have been friends since 1968 and Virginia knew where to find her. Mrs Lee came to the launch with her husband and she smiled all evening. It was gold.

So Tiger Stone has been thoroughly launched and I couldn’t have asked for a better welcome to the world.